Glenn Cameron is the founder and president of Innovative Therapy Canada 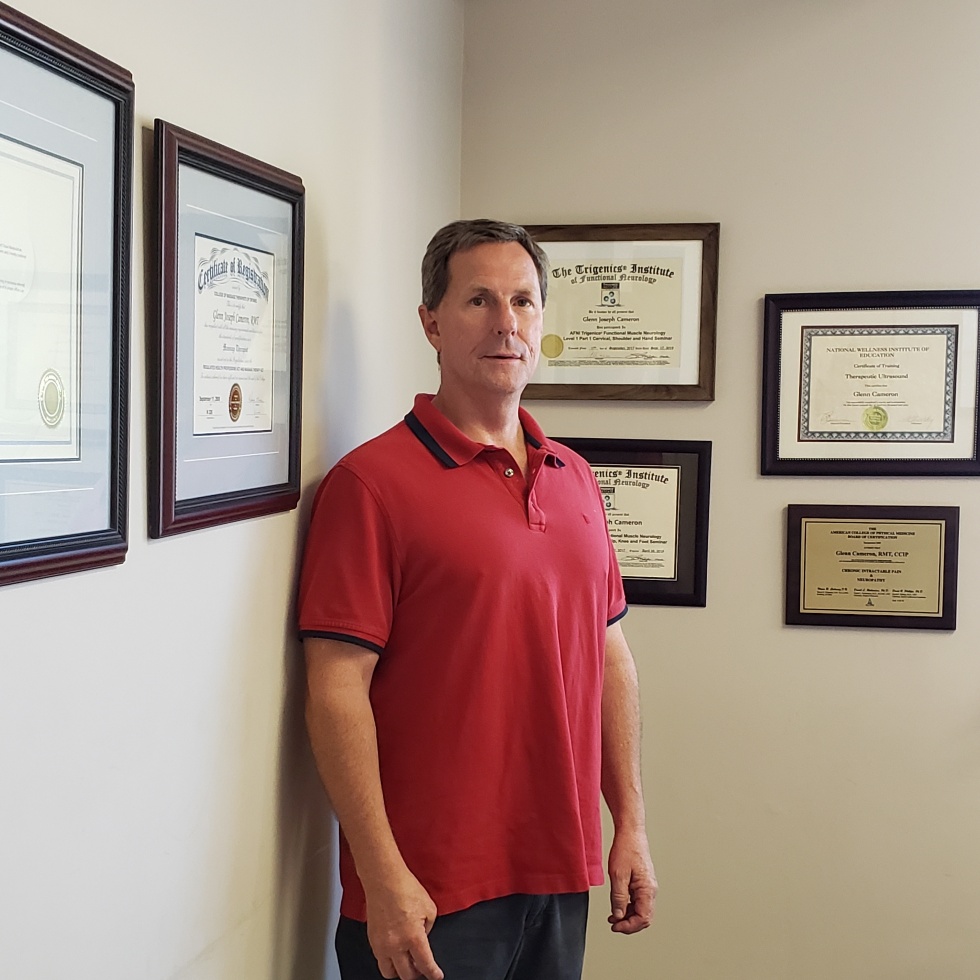 Robbed of his sight … not his vision

Glenn Cameron is blind.  He was born with retinitis pigmentosa, a genetic eye disorder that eventually robs a person of their sight.  He had good vision in his earlier years, enjoyed winter, and summer sports and became a pilot until his vision deteriorated- ending his flying days at the age of 24.  Two years later, Glenn gave up his driver’s license, beginning the next phase of life with a visual disability

He was forced out of his career as an electronics service technician and then as a computer consultant, due to degenerating vision.  Wanting to continue being a functional part of society, he targeted a career that would not depend on sight.

Therefore, fourteen years ago, Glenn enrolled in an extensive professional therapeutic massage therapy program in Ottawa, Canada, while living 2 hours away in his home city of Cornwall.  His relentless determination to succeed saw him cut every book apart to scan thousands of individual pages, converting them into readable text by the screen reading software on his computer.

With the help of his life-sized skeleton, which is still an integral part of his clinic today, Glenn endured and graduated.  He could not know then how his vision loss would change his life and the lives of others whom he would eventually treat.

Glenn thought learning Braille was the next normal progression for a person going blind.  There was no way for him to know then how this would change his life forever. Learning to read Braille would prove to be life-altering.

It took almost five years to develop the sensitivity in his fingers to be able to read the tiny Braille dots with accuracy and speed, mentally converting the dot patterns into alphabetical characters and ultimately words and sentences.  According to medical researchers, we have roughly 50,000 sensation receptors in every square inch of our fingertips, but most do not develop sensitivity in these receptors.  Those who read Braille do- seen as a rather unique and very special coping mechanism.

Glenn has developed a rare sense of touch, a virtual “7th sense”-that allows him to feel problems in the body that the best imaging equipment like MRI’s, may not even detect.  He uses this seventh sense to find the causes for pain and immobility with remarkable accuracy.

He is grateful to have acquired the advanced knowledge and skill to help people from all over the world, solving issues they cannot seem to get resolved where they live.  Glenn offers almost everyone the chance for a much better quality of life.  It is a career-driven by empathy and a passion for resolving even the most difficult of pain issues in people.

Glenn began his education with a 3,000-hour therapeutic massage therapy program in Ottawa, graduating and becoming professionally certified as a Registered Massage Therapist RMT, specializing in the therapeutic aspect of the profession. Being blind and able to feel deep musculoskeletal dysfunctions led him on an odyssey to learn what these dysfunctions meant and, more importantly, what caused them and how to solve them.

This began with his first post-graduate training in the use of Extracorporeal Shockwave Therapy, a unique, acoustic wave technology, more commonly known to break apart kidney stones in a process called lithotripsy.  The world’s leading research and developers of the technology, EMS Germany, provided his introductory training. Today, Glenn is one of the most proficient, expert, and busiest users of the technology in North America, having administered over 120 million acoustic shockwaves in over 24,000 treatments.

Over the years, Glenn had the insight to recognize how problems with the nervous system caused problems and chronic pain in the musculoskeletal system, which his hands-on experience and patient research proved existed, sometimes more than some health care practitioners may have witnessed.  Troubled as to why the musculoskeletal system affects and is affected by the autonomic, sympathetic, and parasympathetic nervous systems, he sought out and received advanced neurological education and training in the U.S. in a unique branch of neurology being Functional Neurology.

Further education in musculoskeletal biostructural correction and board certification in the diagnosis and treatment of chronic intractable pain and neuropathy, additionally aided Glenn greatly to a higher level of understanding of what causes pain and, ultimately, what makes it chronic.

Glenn is a technology enthusiast and has equipped his clinic with a collection of the world’s most powerful and capable biomedical-engineered therapeutic technologies, to help him solve almost every musculoskeletal condition that therapy can solve.  He has established his insights based on years of research and case studies he conducted on the conditions he attempted to resolve, to better understand why they developed, and offer permanent solutions for them.

To-date, Innovative Therapy Canada has treated over 5,000 people with well over 24,000 treatments.

Some of our Treatment Specialties