What Is Extracorporeal Shockwave Therapy ESWT?

Extracorporeal Shockwave therapy is the therapeutic use of unique acoustic (sound) waves to break apart extremely painful calcifications and myofascial adhesions in the soft tissues and joints of the body, responsible for most chronic pain situations.

Shockwaves are used in modern medicine as an alternative to surgery to break apart kidney stones in a process termed lithotripsy. In this, its use has the capability to break apart large, hardened stones into smaller fragments that can then pass out of the body in the urine.

Shockwaves are used therapeutically to break apart unwanted, extremely painful calcium deposits from finger and toe joints (bunions, arthritic spurs), calcium deposits in damaged tendons (calcific tendonitis), calcium deposits in damaged muscles, and to completely dismantle the fibrotic twisted/tangled fibres in myofascial adhesions which develop in muscles/tendons/ligaments, responsible for most chronic pain conditions. These myofascial adhesions along with tendinopathies, heel spurs, pinched nerves, general muscle fibre damage, ligament sprains, chronic inflammation, and pinched nerves are all examples of how widespread pain can manifest itself in knees, hips, low back, neck, arms, and legs. Shockwave therapy is the only technology able to break apart the core dysfunctions responsible for most chronic pain conditions.

The Basics of Shockwave Therapy
Shockwaves are a unique type of pressure waves, abruptly alternating from a high- pressure to a low pressure, faster than the speed of sound. They are created within the soft tissues of the body, by the application of extremely powerful acoustic waves from an acoustic wave generator.

Shockwaves are not at all electrical as their name may imply. They are also not to be confused with other technologies such as Ultrasound, TENS, IFC, or muscle stimulators. The term “Shock” wave got its name in physics due to the high speed (faster than the speed of sound) and extremely powerful nature of their acoustic waves.

The sonic boom of a fighter jet travelling faster than the speed of sound is an example of a shockwave being generated by the speed and energy of the jet travelling through the air. The impeller in all pumps and boat motors generate shockwaves all the while they are running.

Brief History:
Shockwaves were first discovered during the second world war when the U.S. military was testing depth charges used to sink enemy submarines. Swimmers at a nearby beach noticed odd sensations on their body but couldn’t identify what they were experiencing. They were experiencing shockwaves created when the depth charges exploded deep underwater, propagating through the water from many miles away.
It wasn’t until the 1980s when the Technology was perfected in Germany for use in breaking apart kidney stones and in the hands of therapists in Canada by the early 2000’s.

Types of Shockwaves: Radial vs. Focused 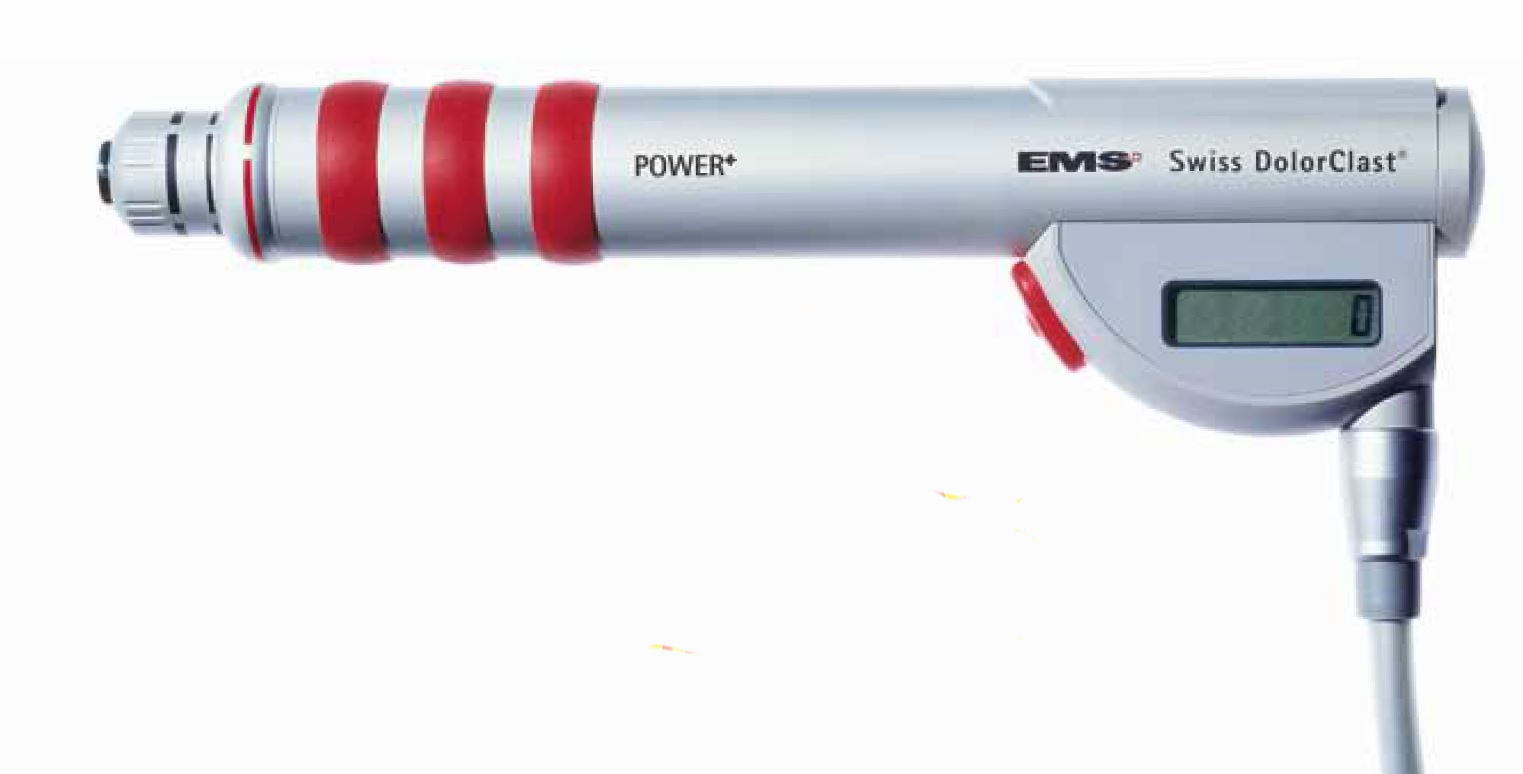 Radial shockwaves disperse in a radial (round) pattern, increasing in the diameter and depth as they travel deeper into the soft tissues of the body. They are preferred to resolve larger regions of dysfunction in muscles, tendons or ligaments.

The success of any shockwave therapy treatment directly depends on the knowledge and skill of the therapist, as well as with the quality of shockwave unit being used.

Focused shockwaves do not disperse, but rather remain in a narrow beam pattern. Focused shockwaves are ideal for small, extremely dense dysfunctions such as chronic tendonitis and heel spurs. These shockwaves require extreme skill from the therapist as an incorrect application angle of the shockwave beam could miss the targeted tissues, resulting in a totally ineffective treatment. Both have their advantages and disadvantages in treating conditions, to be chosen by the therapist based on the condition being treated.

Each acoustic wave has a leading-edge called a “wavefront,” where its energy (ability to do work) is located. This potential energy comes from both the pressure used to create the acoustic wave and from the speed of transmission in the applicator that disperses them. The most powerful shockwaves available to therapists in the world are generated at 90 pounds per square inch (PSI). EMS (Germany) is the original developers of the technology, and with their patent protection are still the only company in the world today producing the most powerful, most effective version of the technology.

The ability for acoustic waves to enter the body, and accomplish therapeutic work, directly come from this high energy wavefront. The more energy a shockwave possesses, the more capable it’s wavefronts will be in penetrating dysfunctions. There are times when some basic shockwave units do not possess sufficient power to get the job done, but the higher power offered by professional units can, but make treatments more expensive.

Here’s how the process works:

Shockwave devices can be thought of as the acoustic wave generators which cause the cavitational process to occur, not as a device which specifically delivers shockwaves into the body.

Healthy muscles, tendons, ligaments, and nerves are not affected by shockwaves as they can easily absorb the cavitational and thus shockwave forces. The acoustic waves simply bounce off bones and hyaline cartilage having no affect positive or negative on them.

Affects of Shockwave Therapy include:
Flush out chronic inflammation and edema from within damaged tissue and joints by the high energy wave front action causing higher pressure in the tissue and joint than the pressure outside it.