Of all the new technologies we offer in our Clinic, Exercising with Oxygen is probably the most unique. This process stimulates high-altitude cardiovascular training without the hassle of going to high altitude locations to do so.

It involves either of a vibration plate, upright/recumbent exercise cycle, or treadmill to provide the cardio exercise. A mask placed over the nose and mouth providing the breathing air, and a reservoir supplying the air.

Athletes know the benefits of high altitude training and many seek out locations in British Columbia, Utah, Wyoming, and Colorado to expose their bodies to their benefits. 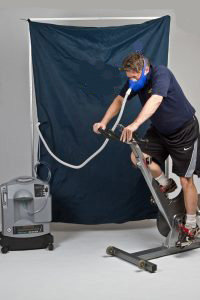 High altitude training provides many benefits that optimize overall health and vitality, by strengthening the heart and lungs beyond any normal capacity they may require in life, that creates built-in endurance and energy levels no other form of exercise can possibly achieve.

Cells utilize glucose and oxygen to fuel their contractions during work and exercise.
Glucose and oxygen reserves inside muscles begin to be depleted as contractions continue.
Glucose and oxygen levels in the blood decrease trying to supply the contracting muscles.
Lung respirations (breathing) increase to replenish decreasing blood oxygen levels, and heart rate increases to deliver it to the muscles.
Glucose is released from fat deposits to replace diminishing blood glucose levels.
Contracting muscles attempt to maintain energy production during periods of contractions, but eventually, lose the battle because of lack of endurance from both the heart and lungs to maintain higher heart rates and lung respiration. Fatigue eventually results and the person feels tired and drained.

Oxygen levels in the air we breathe are approximately 21 percent concentration, with 78 percent nitrogen. This concentration remains constant whether at sea level or at higher elevations.

Although hard physical work, or exercise whether cardiovascular or resistance training serves to strengthen both heart and lungs, they are still done at 21 percent oxygen concentration in the air breathed.

These activities eventually reach a plateau of strength and endurance that is difficult to surpass this is because the oxygen concentration and atmospheric pressure of it being exerted on the lungs is a steady constant 21 percent, and pressure common to the region you live in.

Thus, high altitude training sees the body still breathing in 21 percent oxygen, but at a greatly reduced pressure as a direct effect of being at an increased elevation. This decreased air volume pressure forces the lungs to work harder to extract oxygen from the air, which then causes the heart to also work harder to force more blood through the hard-working lungs. As a result, you achieve a higher level of cardiovascular resistance with breathing that eventually results in super strong heart and lungs.

Our exercising with oxygen setup actually delivers reduced oxygen to the mask on your face while exercising. It is specially designed to deliver 15 percent oxygen, causing the lungs to work as hard as if at 10,000 feet of elevation. You can switch away from this decreased level of oxygen at any time to recover from the slight oxygen debt it creates, but is not harmful to the body if you don’t. People live and exercise in high elevations around the world and in fact, live longer than people at lower elevations.

Exercising with oxygen is typically done with various protocols involving only 15 minutes until your heart and lungs strengthen allowing for longer periods on 15 percent oxygen.

The overall result is an enormously strong cardiovascular system capable of handling any cardio or pulmonary exertion you could expose it to. Your endurance and energy will be far superior to ever before. Your oxygen delivery system will ensure maximum efficiency thus ensuring maximum cellular health.

The healthiest people in the world are those who live in high altitude environments. Now we can enjoy the same benefits, locally!