After suffering different pain symptoms over the past 12 years, where the last 3 have been terrible to say the least, a 32-year-old man “Ryan” finally got the answers he has been looking for most of his adult life.

At age 19, his first symptoms were of sciatica down the leg to the foot and low back pain. Sciatica is a condition where the sciatic nerve when irritated causes pins/needles and pain sensations down the back of the buttocks, leg, calf, and foot. Eventually this pain diminished to his relief.

Over the years he had bouts of pain into his neck, at times right sided, other times left, but this would last on and off- for years.

At the age of 24, Ryan suddenly had loss of sensation to his penis with pain into his perineum. This is not what a 24-year-old man wants to suffer from, especially not knowing why?

Pain then began into his right groin and down to the right knee, which did not let up either. Symptoms seem to be getting worse and some anxiety began setting in.

By age of 29, he began suffering from upper back pain, left chest, sternum, and collar bone pain. Imaging was finally ordered, and it identified that the T3 disc in his upper back and last disc in his low back being L5 were both damaged. The L5 disc was severely damaged potentially beyond recovery.

By now, the problems spread from his penis to scrotum, groin, and rectum, causing both severe unrelenting pain and erectile dysfunction. The left chest and collarbone pain also worsened. All his numerous symptoms over years were now active once again all at the same time, making life difficult, and Ryan was forced out of work due to it.

Now 31 years old, Ryan scrambled for answers, seeing various medical specialists in both Canada and the US, receiving every kind of therapy available, medications and specific exercises which gave no reason at all for his pain. 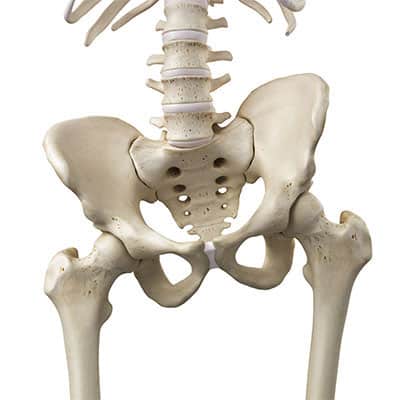 Finally, after 12 years of various pain problems, erectile dysfunction, anxiety, a lost job, tens of thousands of dollars spent in therapy and other medical tests across North America, Ryan finally found his answer.

Ryan was born with a short-left leg!

He walked around for 31 years, from age 1, with a short-left leg. What is even more amazing is that this leg was short by 12MM (1/2 inch) which is significant.

The only factor that kept Ryan from suffering more bodily damage was the fact that he had a strong body, with large mass of muscles on his skeleton. His muscle bulk and strength protected him from what would have been devastating to his joints and discs in his spine.

As it was, he did suffer 2 damaged discs that are now being addressed.

We always say that treating symptoms will never solve a problem.

We always search for and fix actual causes.