With all my heart, I believe God has used you to be my Christmas miracle.  You have helped to give me my life back!

We offer a non-invasive, non-surgical approach to breaking apart these internal adhesions without initiating the body’s inherent response mechanism to reform them. We accomplish this using the world’s most powerful acoustic shockwave therapy technology from EMS Medical (Germany).

These powerful acoustic waves reach deep into the abdomen to break apart myofascial adhesions, not causing harm to any other body structures and organs. Acoustic shockwaves therapy is also used in another process in hospitals to break apart kidney stones in a process called lithotripsy.

We require 2-4 treatments to release abdominal adhesions, offering immediate pain and pressure relief.
The only adverse effects are local bruising of the stomach and internal bloating which typically lasts for three days. This bloating is beneficial inflammation, initiating the body’s regenerative processes to begin rebuilding the tissue damaged in the original adhesions.

Each treatment sees decreased symptoms afterward, as there is less adhesed tissue to break apart, causing them. The final treatment serves to clean up small adhesions that remain.
This process is also used in other body regions where adhesions form as with joint replacement surgery, and soft tissue injuries. 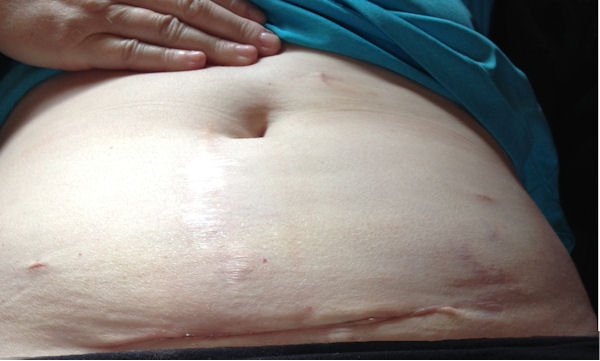 Adhesions may develop after connective tissues have been damaged due to surgery, injury, infection or chronic inflammation. We typically treat it in lower abdominal and pelvic floor regions resulting from abdominal surgery for C-sections, gynecological conditions, pelvic trauma, and even stress. Shoulders, arms, and legs also see its formation for many reasons, resulting in pain and dysfunction.
Adhesions develop whenever the connective tissue portion of muscles, tendons or ligaments has been severely damaged. Examples of this could include:

Abdominal adhesions form in a process over many years after the initial surgery. It is a process that does not know at times when to stop, until the region originally incised by surgery has over-healed, with tough, inelastic connective tissue fibres.

Adhesion Symptoms
The muscle that has suffered a sufficient trauma to see adhesions develop will have some degree of dysfunction, including inelasticity seen by restrictions in the joints they move, pins//needles sensations, decreased circulation issues, and pain which might radiate through a wide region.

Abdominal adhesions are responsible for a wide variety of symptoms, including:

You may be surprised to learn how easy scar tissue/adhesions may form, what can cause the formation, and where they are most often seen.

Amazing Case 1
One of our most memorable treatments was with a woman who lost most of the use of her dominant right forearm due to a motor vehicle accident. Surgeons repaired the severely damaged forearm muscles but did not give her good news about the future use of this arm. Several years later, her arm, could not do much, plagued with a loss of strength and dexterity into the hand. She could no longer peel potatoes, or cut through any food while eating, making life very difficult. Our treatments were able to break apart enough scar tissue to allow the nerves to once again function normally, returning full strength to her arm. She was so happy to report to us that she had made apple pies for Christmas, was able to peel the apples, roll out the dough, and form the pie shell.

Case 2
On another occasion, we were able to eliminate the pain and weakness into a man’s shoulder after undergoing shoulder surgery for a torn tendon. He was convinced that the surgery was not successful when, in fact, it was. Some scar tissue had invaded the site causing his pain and weakness, which was eliminated in 3 treatments. He returned to the gym and was once again lifting weights as he often did before injuring the tendon.

Case 3
We treated a woman for abdominal scar tissue, which developed after having cosmetic surgery to remove fat from her abdomen and tighten her stomach. She eventually lost strength in her leg and was not given a favorable outcome as a result. We were able to remove the encroaching adhesions from the major nerves supplying her leg, restoring normal neurological communication.

For more information, we encourage you to contact us to arrange for a thorough assessment.