IT Band contracture IS a curable condition 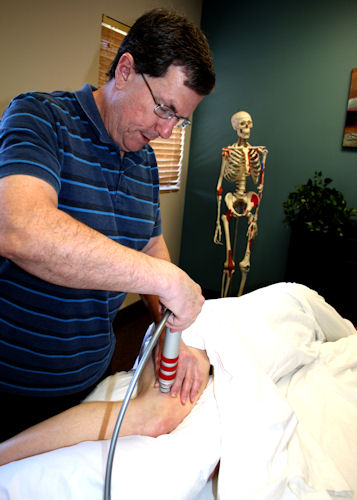 Innovative Therapy Canada has developed a

to halt the progression of permanent damage to

the skeleton by identifying and resolving the

Hi Glenn, Jennifer from Virginia here! I’m doing very well since my treatment and was able to dance at my son’s wedding.

For example, a lumbar spondylolisthesis can develop as a primary condition which then causes iliotibial band contracture to develop. If attempts to resolve the IT band contracture are taken but no attention is paid to the developing spondylolisthesis, permanent damage will occur to this vertebral level of the lumbar spine. Then a more permanent cycle will be carved in stone between the lumbar spine and the IT band which may be impossible to break. The spondylolisthesis will worsen creating pain of its own in the low back, and cause an increase in the IT bands contracturing process causing severe and unrelenting pain of its own. Eventually, walking will be extremely difficult and eventually impossible.

Another example is with the sacroiliac joints of the pelvis. There are 2 joints, one on each side of the pelvis. If 1 becomes dysfunctional, then IT band contracture may develop. If this sacroiliac joint dysfunction is not resolved, it can calcify and fuse never to move again. You will never walk properly again in your life if either one of these joints calcifies. Furthermore, you will live out your life on pain medication because nothing will help this condition, surgical or otherwise.

We have had the misfortune to see people with permanent damage to their skeleton and it’s heartbreaking to know that it could have been prevented. We will never let anyone who seeks treatment in our clinic become a victim to such damage.

We conduct a thorough assessment of the entire skeleton to determine all biomechanical faults, muscular evidence of problems, and joint health. Our lead therapist’s keen sense of touch does not miss anything during this process. He can even detect certain issues in muscles and ligaments that do not show up on MRI scans which are why we are so successful in resolving issues.

Once the primary condition(s) have been correctly identified, a treatment plan is created to address them and the IT band contracture.

If the primary condition is in its early stages, we focus our attention on the contracture to eliminate the unrelenting pain it causes. Then we can focus on the primary conditions to resolve it.
If the primary condition is well established, our focus is to aggressively address it to halt permanent damage from occurring. Once we get it under control, then we can begin resolving the IT band contracture.
Our ultimate goal in treatment is to ensure that all joints are moving correctly and are not being pulled by dysfunctional muscles or ligaments. We employ manually applied myofascial release techniques with the professional use of extracorporeal shockwave therapy to release all contractured muscles and fascia in the entire lower body along with that of the IT band, to release subluxations in the involved articulations, and return the skeleton to its normal neutral posture. The key regions we target include the spine from the T9 level of the thoracic region down to and including the sacrum and coccyx, the Sacroiliac articulations, hips, knees, and the feet.

We often administer a tremendous amount of shockwaves into regions of muscle, ligament or joints themselves to remove extreme dysfunctions resulting from biomechanical issues. IN some cases we work an entire treatment on the sacroiliac articulations attempting to return normal function to them and the major muscles attaching nearby. Our treatments are extremely focused and administered with extreme precision. We know what has to be done and ensure that the work does get done.

If it’s within our ability to resolve the identified primary skeletal biomechanical fault(s), then we will resolve the resulting IT band contracture.

Definition: What is Iliotibial (IT) Band contracture?
Iliotibial band contracture is a condition where the iliotibial band, a large region of connective tissue on the outer aspect of the thigh, has become dysfunctional. Its fibres have developed lumps and/or bands of twisted tangled fascial fibres that collectively result in an overall shortened (contractured) structure.

The iliotibial band gets its name from the two locations where it attaches. Its uppermost attachment site is with the ilium (pelvic bone), comprising the outer thigh, terminating at the tibia (shin bone). This band is comprised of hundreds of thousands of extremely strong and durable connective tissue fibres called fascia. It is not a muscle lacking the ability to elongate or contract as is the case with actual muscle fibres. It is a wide and thick band of extremely strong and durable connective tissue positioned from the knee to the pelvis. Its role in the body is to provide stability to the outer aspect of the thigh and knee where it is needed when the large thigh muscles are working hard. It is like a steel cable running from the hip to the knee.

The most common symptom of this condition is a cramping of the thigh after sitting for a period of time. It is this band that causes stiffness in the thigh after driving for any length of time. For example, if you were to drive from Ottawa to Toronto without stopping, you would have some difficulty in getting out of the vehicle because your thigh would be stiff, weak and perhaps even ache. You would need to walk, and stretch your thigh to help relieve the symptoms being experienced.

Causes:
Iliotibial band contracture develops when the biomechanics of the skeleton are incorrect. This means that the low back, pelvis, knee foot or any combination of them is dysfunctional.

It is a very simple condition to treat. Misalignment issues with the leg may cause excessive forces to be felt on the band’s fascial fibres, resulting in the formation of extremely painful lumps throughout the band. This occurs over time with no warning signs. When symptoms are finally experienced, it’s too late. The iliotibial band contracturing process has already been well established.

In Depth: What’s Really Happening?
Fascia is an extremely tough connective tissue that binds the entire body together. If its fibres are exposed to prolonged excessive forces, they can become twisted three-dimensionally and back on themselves, forming lumps and long bands of them. Each lump that develops is painful due to the entrapped free nerve endings caught in the midst of the entangled fascial fibres. Pain will always be present after a person has exposed the iliotibial band to the same biomechanical pressures that created the condition in the first place

If you or someone you know has IT band contracture and they are not getting a resolution to it, we strongly urge you to visit us for a thorough assessment to determine exactly what’s wrong.